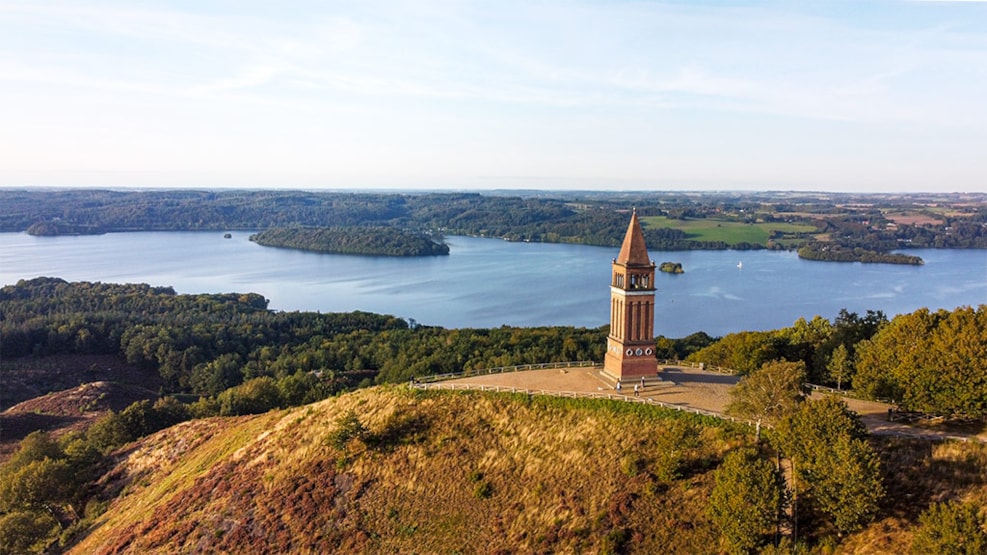 Himmelbjerget ("The Sky Mountain") rises 147 metres above the landscape and is one of Denmark’s finest and most traditional places for outings.

This has been the case ever since the old steamer Hjejlen made its call at the foot of the mountain for the very first time in 1861. The steam boat Hjejlen and the other tour boats sail from Ry and Silkeborg to Himmelbjerget in the summer season.

Climb the proud mountain slope from the lakeside and fill up your senses, hunger and thirst when you’ve reached the top at Hotel Himmelbjerget or in one of the souvenir shops. Relax on the big lawn and look up into the sky.

You can also drive, walk or cycle to Himmelbjerget - from the parking lot at the top there is only 200 meters to the top and the beautiful view point that is worth a visit all year round.

From Ry there is only 7 km to Himmelbjerget. It is a beautiful walk through the forest and along the lakes. It is flat all the way to the foot of the mountain - that is where the climb starts. You can walk back or take one of the tour boats. The route to Himmelbjerget from Ry is a part of a longer route of 40+ km. See the route here.

At Himmelbjerget there are many lovely walks around the area. See them here.

Despite the fact that Himmelbjerget rises 147 metres above sea level, the geologists claim that Himmelbjerget is a 'false' hill. When the Ice Age was over, the enormous melt waters dug into the ground and formed the subglacial stream trenches whose steep slopes form the 'false' hill - as opposed to the 'genuine' hill which is evenly rounded on all sides. In the subglacial stream trench formed by the melt water you find today the beautiful lake Julsø, originally Hjulsoe (the name refers to a cultic place), above which Himmelbjerget rises.

That Himmelbjerget became a well-known place is first and foremost due to the Danish poet St. St. Blicher. The story goes that one summer day in 1838 some students, who were on a walking tour, climbed the hill and became so enthusiastic over the scenic beauty of the place that they wrote to St. St. Blicher suggesting that he should hold a popular meeting at Himmelbjerget. Blicher accepted the idea with enthusiasm and gathered thousands of people at his meetings, of which the first one was held on August 1, 1839.

However, in his enthusiasm Blicher forgot to ask permission for holding popular meetings from the owner of Himmelbjerget, farmer P. Nielsen of Himmelbjerggaarden, and the owner took it amiss to such a degree that he started a veritable war in the papers in the form of letters to the editor. In the summer of 1840 the Danish King Christian VIII visited Jutland, and when he heard about the 'feud', he intervened and solved the problem by leasing Himmelbjerget from the owner. Thus anybody was free to go there, and finally in 1871 the Crown obtained a deed on the property and absolute ownership.