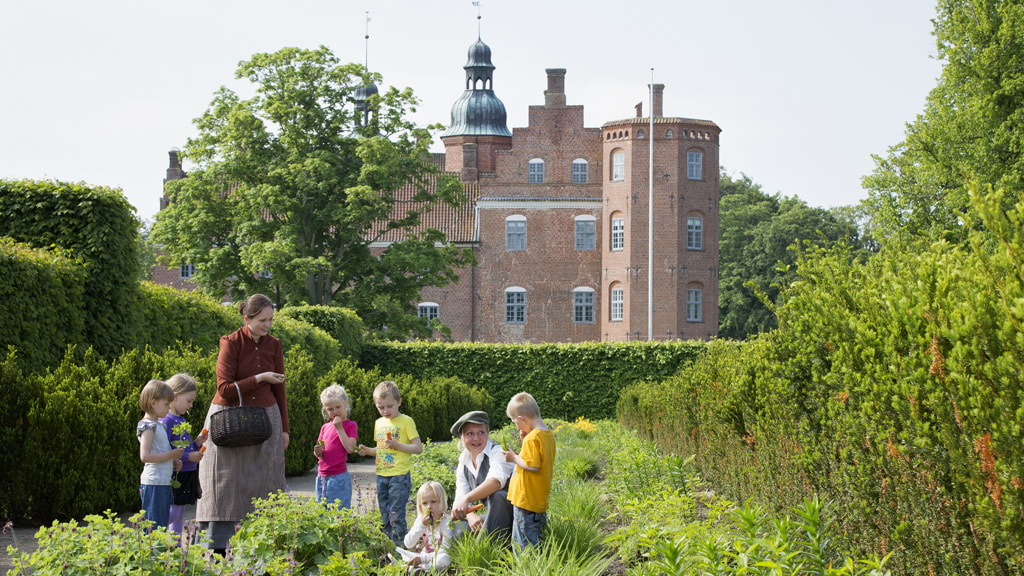 Photo: Destination Djursland
Attractions
Museums
A tour of Gammel Estrup’s magnificent halls and rooms gives a unique insight into 600 years of the grand life of the Danish aristocracy.
Address

Driving along the main road from Grenaa to Randers you pass Gammel Estrup on your right-hand side shortly after leaving Auning. On the left-hand side of the road is Helligbjerget (Holy Hill), which down the ages has served as a landmark and viewing point. The manor is a Renaissance building in red brick with a courtyard surrounded by a moat. For over 600 years Gammel Estrup was passed down by inheritance - until it was finally sold in 1926. As you pass the manor you can also see the extensive farm buildings.

A journey into the past

The individual rooms of the manor are furnished to show how the rooms might have been laid out during the centuries when the manor was inhabited.

An exhibition gives the Manor House Museum’s version of life downstairs at Danish manor houses around the year 1900. The servants’ quarters consist of the servants’ dining room, where all the staff working at the main building ate their meals, the housekeeper’s room next door to it and in particular the manor house kitchen with its great wood-fired kitchen range dating from the 1880s. In the kitchen, the cook can often be seen hard at work cooking or baking at the hot kitchen range.

At Gammel Estrup, a lot of the original gardens have been preserved. The natural focus of the gardens is the two elegant orangeries from 1725-26.

These beautiful buildings with their great windows were used to protect the delicate garden plants from frost during the winter. A new exhibition about manor house gardens during the Renaissance and Baroque periods opens in May. For more information, visit www.gammelestrup.dk.