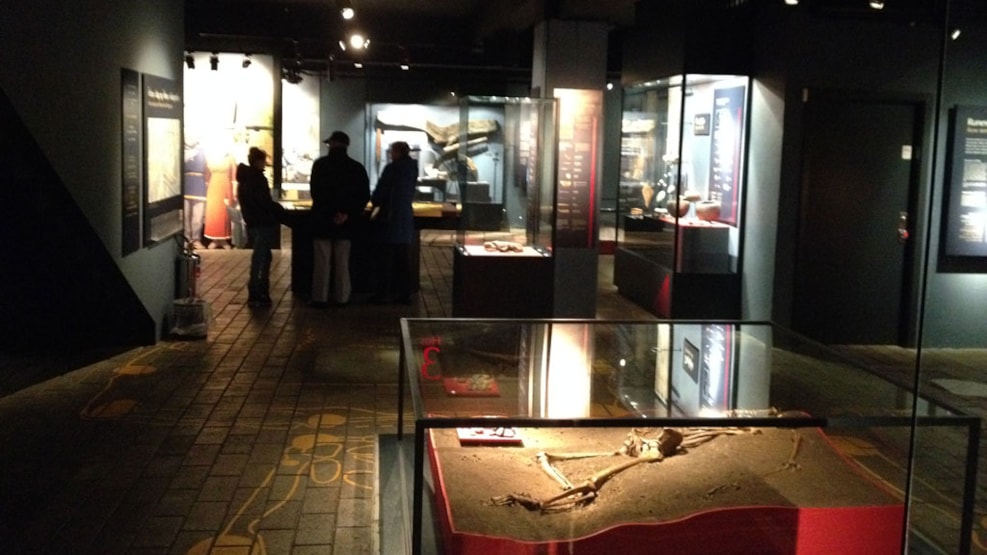 The refurbishment was due to new findings from the Viking Age

With the opening of the refurbished Viking Museum in 2008, Moesgaard Museum presents a range of artefacts which have not seen the light of day for a thousand years.The reason behind the refurbishment is partly the fact that the 40 years which have passed since the first opening of the Viking Museum meant that the exhibition needed to be refreshed, and partly that a number of excavations since the mid-1990s have cast a new light on the founding and development of Aarhus.

Both originals and replicas

The refurbishment of the exhibition also means that there are now new textual contents, a modern interior with new posters and exhibition cases, and improved lighting. In addition sound pictures have been added, and there is now a TV screen showing an animation of a Viking attack on Århus. A detailed model city of Aarhus at the time of Harold Bluetooth – around 980 – is exhibited in order to provide a broader perspective of Aros in the Viking Age.

"New" and old artifacts are part of the exhibition

Besides this, the Viking Museum has seen the addition of a number of new artefacts, including a well-preserved framed well of the type used in the Viking Age, and a long list of magnificent Viking Age finds uncovered during excavations on the museum site and in other parts of Aarhus. In a very few cases the collection will hold replicas of original artefacts – which is due to security requirements as the museum is not under constant security-supervision.

The original town centre holds much resemblance to Viking Age

Aarhus has turned out to be older than initially assumed; its origins can now be traced all the way back to latter decades of the 8th century. The towns of Ribe and Hedeby are the only ones whose origins can be traced (some decades) further back in time than Aarhus. What makes Aarhus extraordinary is that the original town centre, in contrast to Ribe and Hedeby, has remained at the very same location during the 1200 years which have passed since then, and this is quite unique in a Scandinavian context.

Please note that the Viking Museum only accepts credit cards.

Free entrance for children under the age of 18.

The museum is closed on bank holidays.