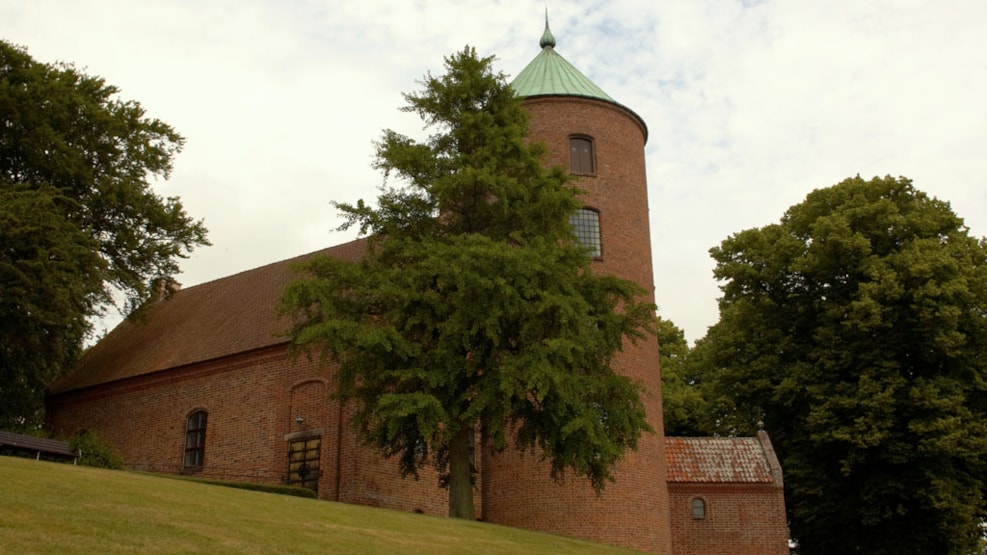 The chapel is the remains of the former Skanderborg castle which was definitively demolished in 1770. In 1562 – 63 King Frederick the 2nd rebuilt the medieval castle on Slotsholmen (an elevation in the ground that used to be a small island) to a modern fortress. Because of the financial difficulties of the Kingdom of Denmark the king chose to take up residence in Skanderborg. Hence in 1572 a chapel was constructed in the newly established royal wing which at the same time was increased with two storeys. The castle functioned as a residence for the royal family for several years and among other things it could be mentioned that Christian the 4th learned seamanship as well as horsemanship in Skanderborg.

The present church consists of a long nave with a round tower with a conical, copper spire. The tower was originally one of the castle’s corner towers.
Below the church in the castle’s old wine cellar a crypt has been established with four glass mosaics by the sculptor V. Foersom Hegndal.

A variety of the original furniture in noble renaissance can still be seen in the church.

The baptismal font from 1850 has been made after a drawing by Bindesbøll.

At the Slotsbanken, which is part of the royal gardens, a bust of Frederick the 6th by  Thorvaldsen can be seen.

NB: Please respect the ecclesiastical ceremonies on weekdays and during the weekends.

For further information about the church services, we kindly ask you to go to the church's own website: www.kirker-skanderborg.dk/