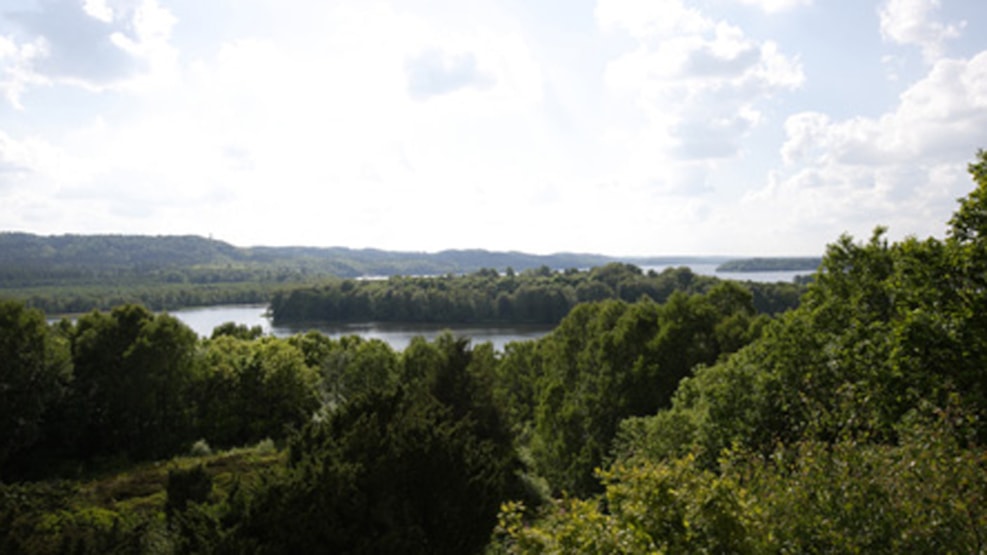 Alling Vest is a nature reserve of approx 270 ha. and one of the most magnificent sceneries in Denmark.

The strong relief of heights and valleys was formed by the natural forces released during the latest Ice Age. Water from the melting ice and the precipitation furrowed the countryside and formed the valleys and gullies we see today. Seen from the bottom of valleys or gullies the bordering heights seem often to be towering, but in reality they are no higher than the extensive moraine plateau behind them. The largest of these valleys is the Århus Valley, which led the melted water westwards. This subglacial stream trench stretches from Århus to Silkeborg, and in its bed a large number of lakes were formed, i.a. Knudsø, Birksø and Julsø. From Bryggebjerg (79 m) is a magnificent view.

In the more or less wild groves and on the banks of stream and lakes you find many different species of trees and bushes: oak, beech, birch, hawthorn, alder buckthorn, hazel and elder, dog rose and alder, and also spruce and pine. In many places the trees are overrun with honysuckle, and before leafing foliation the underbrush is covered by pilewort and wood anemone. Along field roads and paths you find species such as medicinal comfrey and sweet cicely, which both grew in the medieval convent gardens. On the heathery hillsides you find the common species of the moorland flora, and at Bryggebjerg beautiful groups of juniper.

The natur reserve boasts a bird life with an impressive number of species: great crested grebe, black-headed gull, mute swan, sheldrake and shelduck, mallard, pochard, coot, heron, reed warbler, reed bunting, and green woodpecker. In summer evenings you may see the woodcock, and the kingfisher is a regular visitor.